Suppose a person must decide between two options, \(Y = 0\) or \(Y = 1\). Utility theory posits that each option has an associated utility, \(U_0\) and \(U_1\), respectively. The person chooses the option with the largest utility. My intuition for logistic regression arises from understanding that it arises from a specific utility model.

This model is shown graphically below. 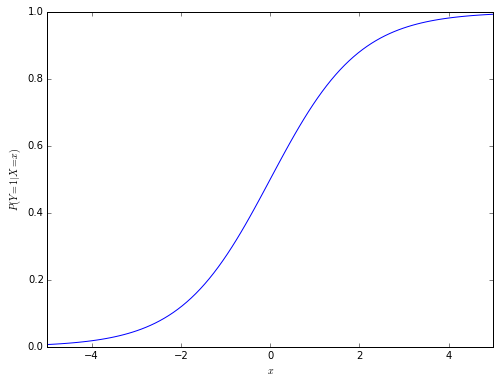 In terms of utility theory, we assume that each person’s utilities are related to \(X\) by

The Gumbel distribution has the density function

To show that this utility model gives rise to logistic regression, we see that

It is useful to note that the difference of independent identically distributed Gumbel random variables follows a logistic distribution, so

The fact that there are infinitely many solutions of this equation is a subtle but important point of utility theory, that the difference in utility is both location and scale invariant. We will prove this statement in two parts.

Together, these invariances show that the units of utility are irrelevant, and the only quantity that matters is the difference in utilities. Due to the location invariance in utilities, we may as well set \(\beta_0 = 0\), so \(\beta_1 = 1\) for convenience. Our utility model is therefore

To verify that this utility model is equivalent to logistic regression in a second way, we will simulate \(P(Y = 1 | X = x)\) by generating Gumbel random variables. 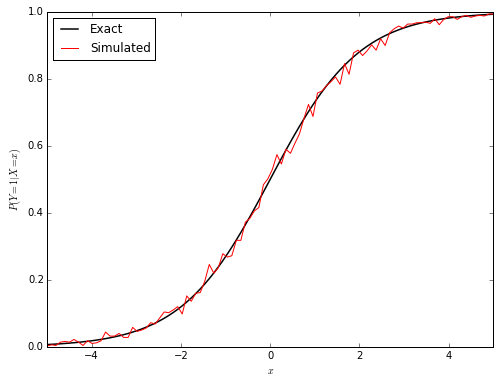 The red simulated curve is reasonably close to the black actual curve. (Increasing N would cause the red curve to converge to the black one.)

Aside from being an important tool in econometrics, utility theory helps shed light on logistic regression. The perspective it provides on logistic regression opens the door to generalization and related theories. If the random portions of utility, \(\varepsilon_1\) and \(\varepsilon_0\) are normally distributed instead of Gumbel distributed, the utility model gives rise to probit regression. For a thorough introduction to utility/choice theory, consult the excellent book Discrete Choice Models with Simulation by Kenneth Train, which is freely available online.