Last April, I wrote a post that used Bayesian item-response theory models to analyze NBA foul call data. Last November, I spoke about a greatly improved version of these models at PyData NYC. This post is a write-up of the models from that talk.

These reports are notably different from play-by-play logs, in that they include information on non-calls for notable on-court interactions. This non-call information presents a unique opportunity to study the factors that impact foul calls. There is a level of subjectivity inherent in the the NBA’s definition of notable on-court interactions which we attempt to mitigate later using season-specific factors.

Russel Goldenberg of The Pudding has been scraping the PDFs that the NBA publishes and transforming them into a CSV for some time. I am grateful for his work, which has enabled this analysis.

We download the data locally to be kind to GitHub.

We use only a subset of the columns in the source data set.

Each row of the DataFrame represents a play and each column describes an attrbiute of the play:

The previous post focused on the second question, and gave the first question only a cursory treatment. This post enhances our treatment of the first question, in order to control for non-skill factors influencing foul calls (namely intentional fouls). Controlling for these factors makes our estimates of player skill more realistic.

First we examine the types of calls present in the data set.

The portion of call_type before the colon is the general category of the call. We count the occurence of these categories below. 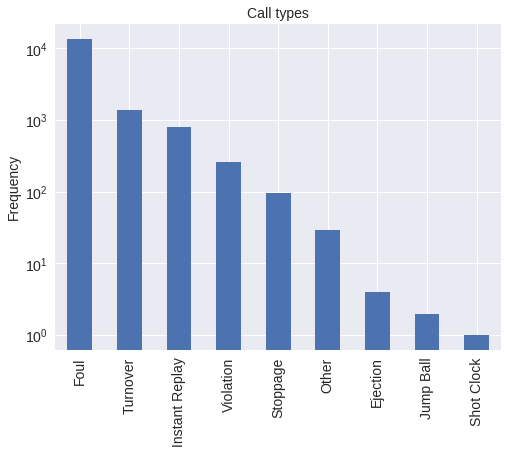 We restrict our attention to foul calls, though other call types would be interesting to study in the future.

We count the foul call types below. 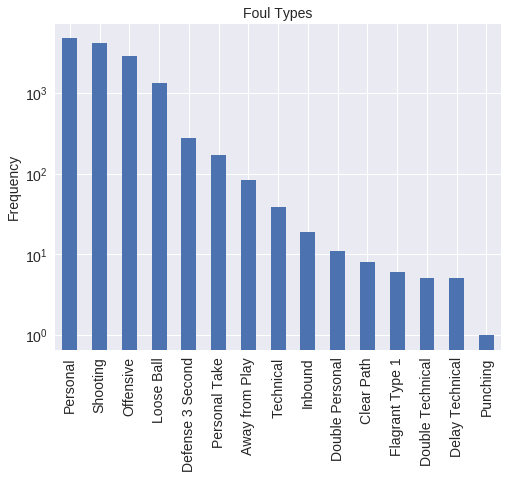 We restrict our attention to the five foul types below, which generally involve two players. This subset of fouls allows us to pursue our second research question in the most direct manner.

There are a number of misspelled team names in the data, which we correct.

We also convert each game date to an NBA season.

We clean the data by

About 55% of the rows in the original data set remain.

We use scikit-learn’s LabelEncoder to transform categorical features (call type, player, and season) to integers.

We transform the data by

The resulting data is ready for analysis.

Below we examine the foul call rate by season. 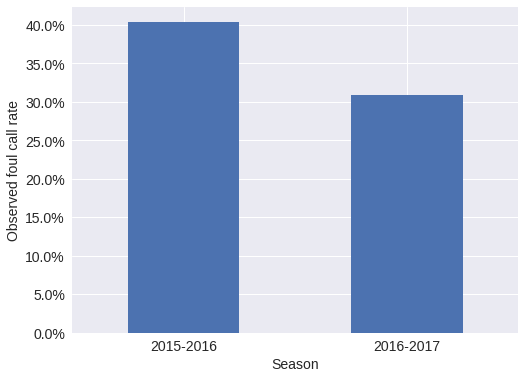 There is a pronounced difference between the foul call rate in the 2015-2016 and 2016-2017 NBA seasons; our first model accounts for this difference.

We use pymc3 to specify our models. Our first model is given by

We use a logistic regression model with different factors for each season.

We now sample from the model’s posterior distribution.

We rely on three diagnostics to ensure that our samples have converged to the posterior distribution: 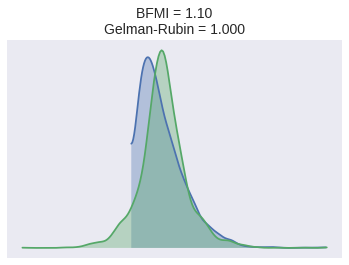 We use the samples from p’s posterior distribution to calculate residuals, which we use to criticize our models. These residuals allow us to assess how well our model describes the data-generation process and to discover unmodeled sources of variation.

The per-season residuals are quite small, which is to be expected.

Anyone who has watched a close basketball game will realize that we have neglected an important factor in late game foul calls — intentional fouls. Near the end of the game, intentional fouls are used by the losing team when they are on defense to end the leading team’s possession as quickly as possible.

The influence of intentional fouls in the plot below is shown by the rapidly increasing of the residuals as the number of seconds left in the game decreases. 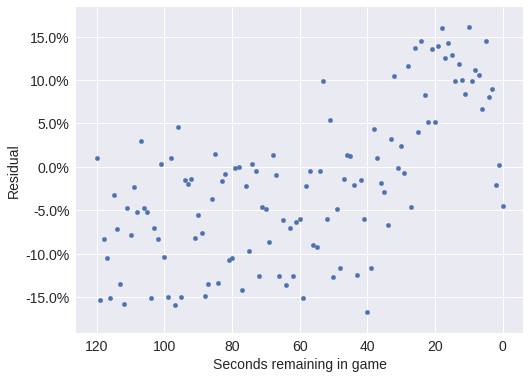 The following plot illustrates the fact that only the trailing team has any incentive to committ intentional fouls. 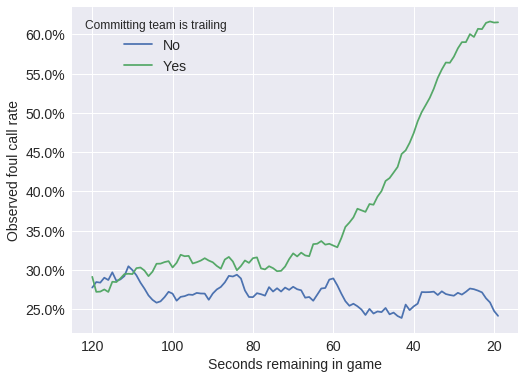 Intentional fouls are only useful when the trailing (and committing) team is on defense. The plot below reflects this fact; shooting and personal fouls are almost always called against the defensive player; we see that they are called at a much higher rate than offensive fouls. 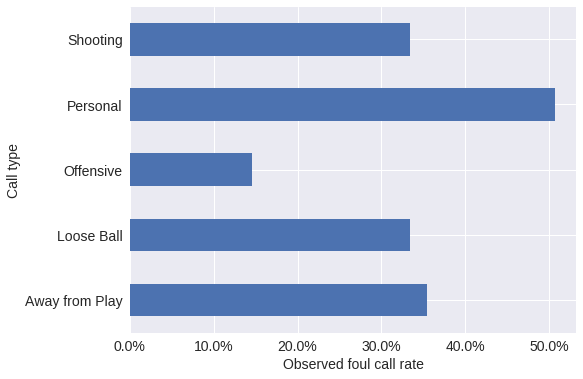 We continue to model the differnce in foul call rates between seasons.

Throughout this post, we will use hierarchical distributions to model the variation of foul call rates. For much more information on hierarchical models, consult Data Analysis Using Regression and Multilevel/Hierarchical Models. We use the priors

For sampling efficiency, we use an [non-centered parametrization](http://twiecki.github.io/blog/2017/02/08/bayesian-hierchical-non-centered/#The-Funnel-of-Hell-(and-how-to-escape-it%29) of the hierarchical normal distribution.

Each call type has a different foul call rate.

We add score difference and the number of possessions by which the committing team is trailing to the DataFrame.

The plot below shows that the foul call rate (over time) varies based on the score difference (quantized into possessions) between the disadvanted team and the committing team. We assume that at most three points can be scored in a single possession (while this is not quite correct, four-point plays are rare enough that we do not account for them in our analysis). 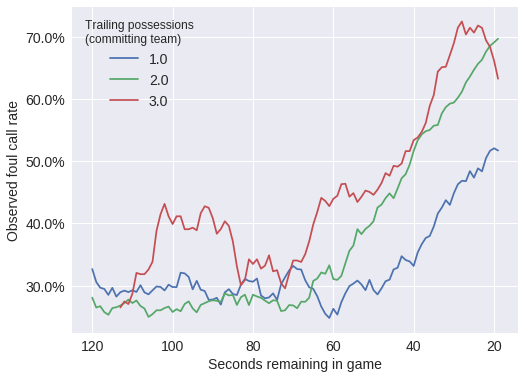 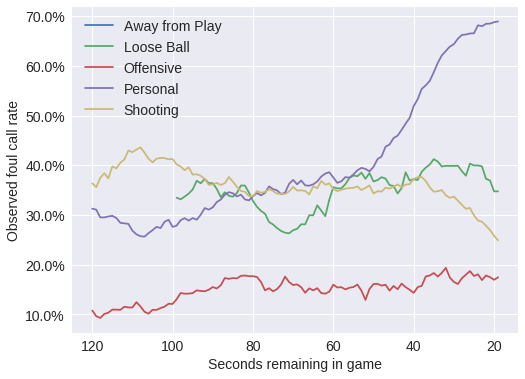 Due to the NBA’s shot clock, the natural timescale of a basketball game is possessions, not seconds, remaining. 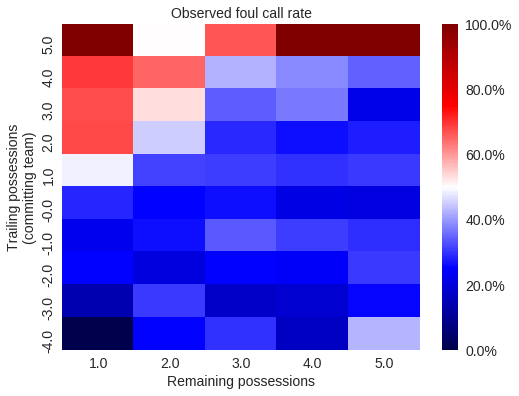 The heatmap above shows that the foul call rate increases significantly when the committing team is trailing by more than the number of possessions remaining in the game. That is, teams resort to intentional fouls only when the opposing team can run out the clock and guarantee a win. (Since we have quantized the score difference and time into posessions, this conclusion is not entirely correct; it is, however, correct enough for our purposes.)

These plots confirm that most intentional fouls are personal fouls. They also show that the three-way interaction between trailing possesions, remaining possessions, and call type are important to model foul call rates.

The foul call rate is a combination of season, call type, and possession factors.

The BFMI and Gelman-Rubin statistics for this model indicate no problems with sampling and good convergence. 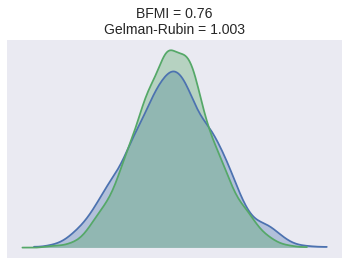 The following plots show that, grouped various ways, the residuals for this model are relatively well-distributed. 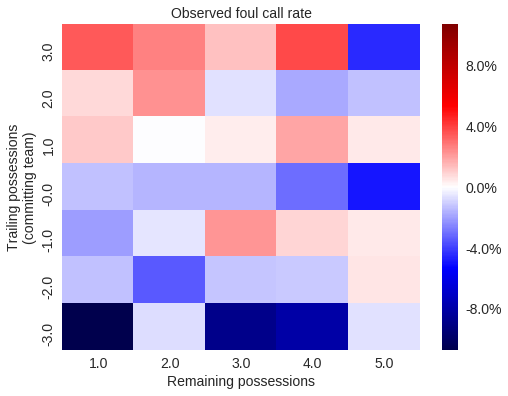 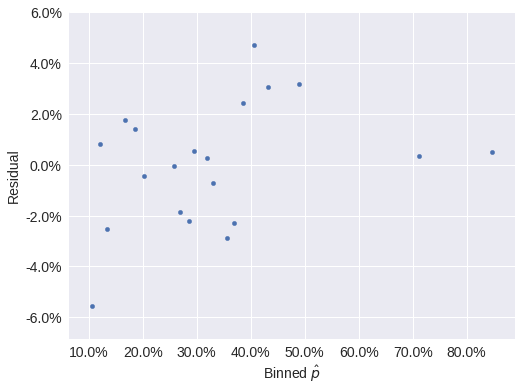 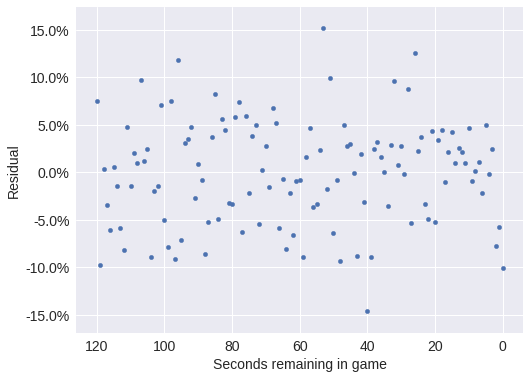 Since smaller WAICs are better, the possession model clearly outperforms the base model. 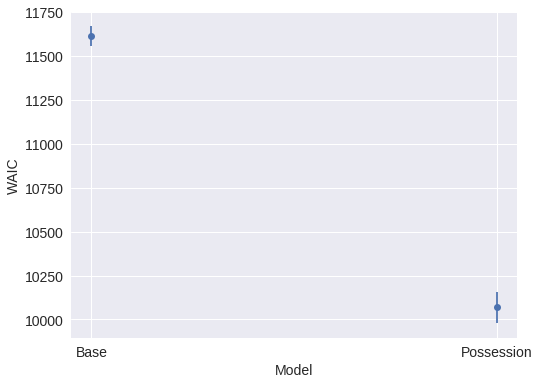 We now turn to the question of whether or not committing and/or drawing fouls is a measurable skill. We use an item-response theory (IRT) model to study this question. For more information on Bayesian item-response models, consult the following references.

The item-response theory model includes the season, call type, and possession terms of the previous models.

Each disadvantaged player has an ideal point (per season).

Each committing player has an ideal point (per season).

Players affect the foul call rate through the difference in their ideal points.

The sum of the game and player effects determines the foul call probability.

None of the sampling diagnostics indicate problems with convergence. 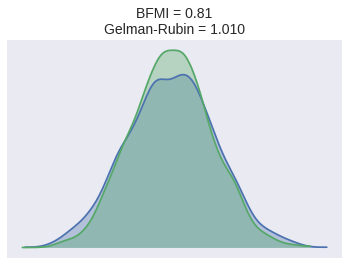 The binned residuals for this model are more asymmetric than for the previous models, but still not too bad. 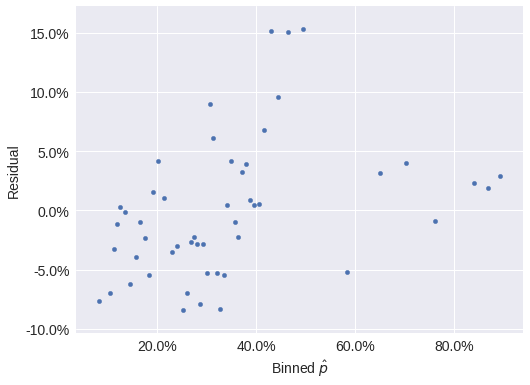 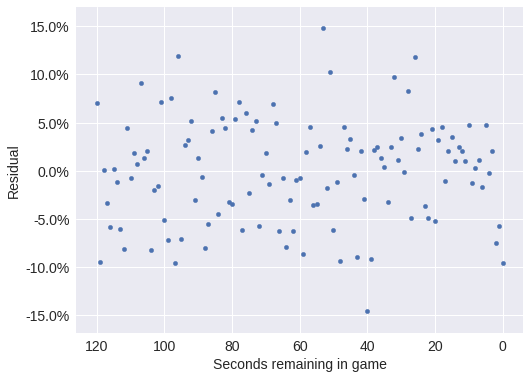 The IRT model is a marginal improvement over the possession model in terms of WAIC. 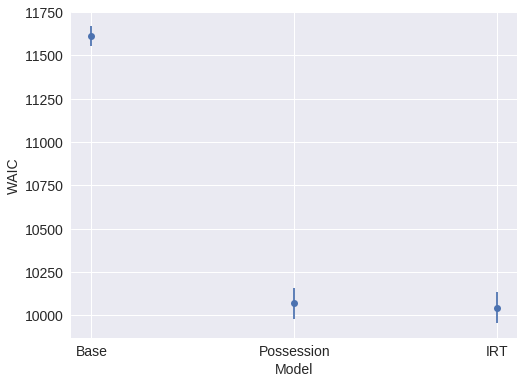 The following plot shows that the committing skill appears to be somewhat larger than the disadvantaged skill. This difference seems reasonable because most fouls are committed by the player on defense; committing skill is quite likely to be correlated with defensive ability. 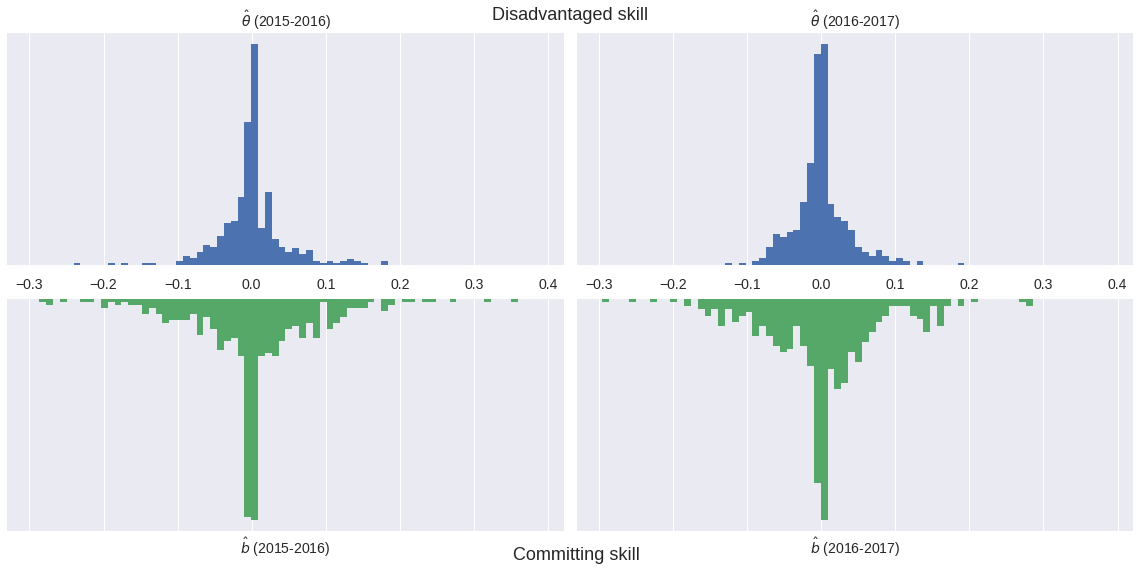 We now examine the top and bottom ten players in each ability, across both seasons.

The top players in terms of disadvantaged ability tend to be good scorers (Jimmy Butler, Ricky Rubio, John Wall, Andre Iguodala). The presence of DeAndre Jordan in the top ten may to be due to the hack-a-Shaq phenomenon. In future work, it would be interesting to control for the disavantage player’s free throw percentage in order to mitigate the influence of the hack-a-Shaq effect on the measurement of latent skill.

Interestingly, the bottom players (in terms of disadvantaged ability) include many stars (Pau Gasol, Carmelo Anthony, Kevin Durant, Kawhi Leonard). The presence of these stars in the bottom may somewhat counteract the pervasive narrative that referees favor stars in their foul calls. 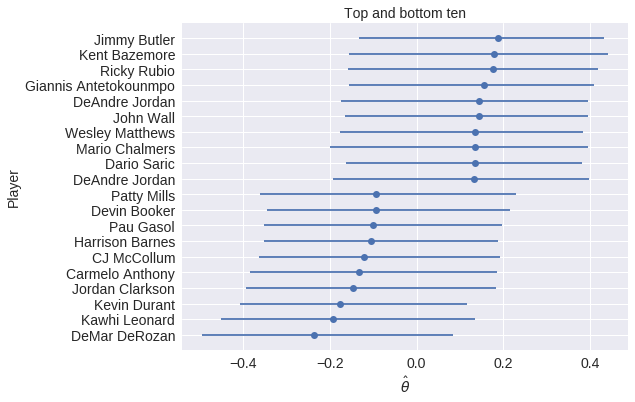 The bottom ten players include many that are known to be defensively challenged (Ricky Rubio and James Harden). Dwight Howard was, at one point, a fierce defender of the rim, but was well past his prime in 2015, when our data set begins. Chris Paul’s presence in the bottom is somewhat surprising. 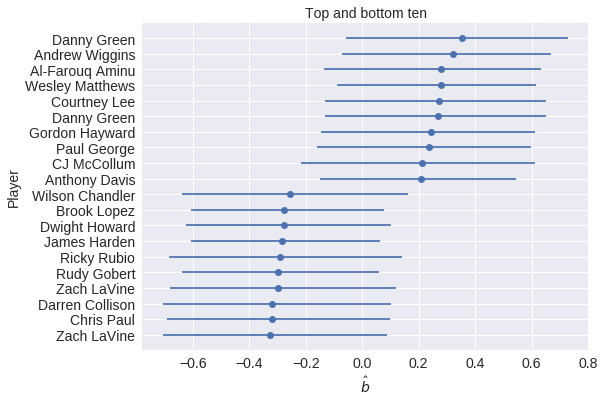 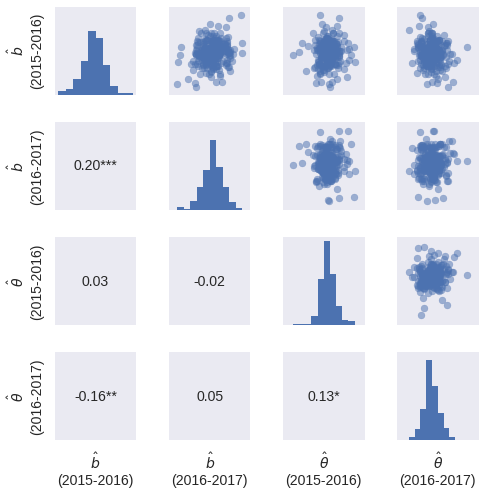 Since we can only reasonably estimate the skills of players for which we have sufficient foul call data, we plot the correlations below for players that appeared in at least ten plays in each season. 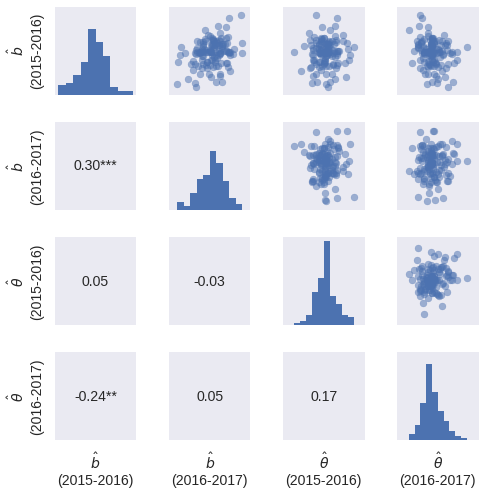 As expected, the season-over-season latent skill correlations are higher for this subset of players.

From this figure, it seems that committing skill (\(\hat{b}\)) exists and is measurable, but is fairly small. It also seems that disadvantaged skill (\(\hat{\theta}\)), if it exists, is difficult to measure from this data set. Ideally, the NBA would release a foul report for the entirety of every game, but that seems quite unlikely.

In the future it would be useful to include a correction for the probability that a given game appears in the data set. This correction would help with the sample bias introduced by the fact that only games that are close in the last two minutes are included in the NBA’s reports.