A few weeks ago, YouGov correctly predicted a hung parliament as a result of the 2017 UK general election, to the astonishment of many commentators. YouGov’s predictions were based on a technique called multilevel regression with poststratification, or MRP for short (Andrew Gelman playfully refers to it as Mister P).

I was impressed with YouGov’s prediction and decided to work through an MRP example to improve my understanding of this technique. Since all of the applications of MRP I have found online involve R’s lme4 package or Stan, I also thought this was a good opportunity to illustrate MRP in Python with PyMC3. This post is essentially a port of Jonathan Kastellec’s excellent MRP primer to Python and PyMC3. I am very grateful for his clear exposition of MRP and willingness to share a relevant data set.

MRP was developed to estimate American state-level opinions from national polls. This sort of estimation is crucial to understanding American politics at the national level, as many of the important political positions of the federal government are impacted by state-level elections:

Of course, as YouGov demonstrates, MRP is more widely applicable than estimation of state-level opinion.

We load only the columns which we will use in the analysis and transform categorical variables to be zero-indexed.

These three surveys collected data from roughly 6,300 respondents during 2005 and 2006.

We see that the number of respondents varies widely between states. 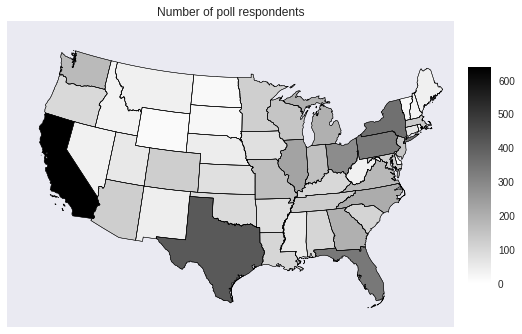 Notably, there are no respondents from some less populous states, such as Alaska and Hawaii.

Faced with this data set, it is inuitively appealing to estimate state-level opinion by the observed proportion of that state’s respondents that supported gay marriage. This approach is known as disaggregation. 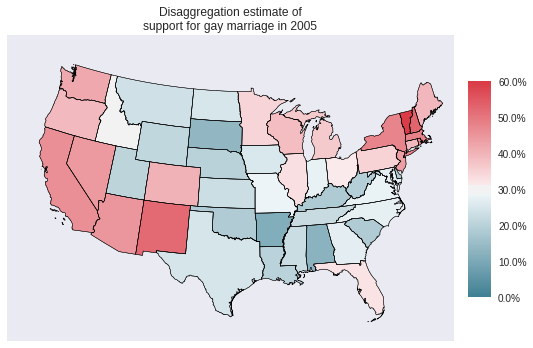 The simplicity of disaggregation is appealing, but it suffers from a number of drawbacks. Obviously, it cannot estimate the state-level support for gay marriage in states with no respondents, such as Alaska and Hawaii. Similarly, for small/low population states with some respondents, the sample size may be too small to produce reliable estimates of opinion. This problem is exacerbated by the fact that for many issues, opinion is quite correlated with demographic factors such as age, race, education, gender, etc. Many more states will not have sufficient sample size for each combination of these factors for the disaggregate estimate to be representative of that state’s demographic compositon. 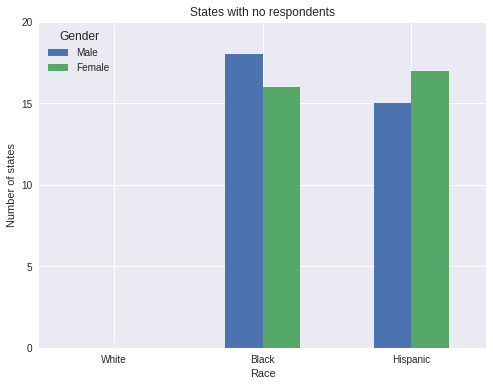 The plot above illustrates this phenomenon; a number of states have no nonwhite male or female respondents. Even more states will have very few such respondents. This lack of data renders the disaggregation estimates suspect. For further discussion and references on disaggregation (as well as an empirical comparison of disaggregation and MRP), consult Lax and Phillip’s How Should We Estimate Public Opinion in the States?.

MRP lessens the impact of this per-state respondent sparsity by first building a multilevel model of the relationship between respondents’ states and demographic characteristics to opinion, and subsequently using the predictions of this multilevel model along with census data about the demographic composition of each state to predict state-level opinion. Intuitively, the multilevel model employed by MRP is a principled statistical method for estimating, for example, how much men in Pennsylvania share opinions with men in other states versus how much they share opinions with women in Pennsylvania. This partial pooling at both the state- and demographic-levels helps MRP impute the opinions of groups present in states that were not surveyed.

The rest of this post is focused primarily on the execution of MRP in Python with PyMC3. For more detail on the theory and accuracy of MRP, consult the following (very incomplete) list of MRP resources:

Following the MRP primer, our multilevel opinion model will include factors for state, race, gender, education, age, and poll. In order to accelerate inference, we count the number of unique combinations of these factors, along with how many respondents with each combination supported gay marriage.

This reduction adds negligible mathematical complexity (several Bernoulli distributions are combined into a single binomial distribution), but reduces the number of rows in the data set by nearly half.

We will refer to each unique combination of state and demographic characteristics as a cell. Let \(n_i\) denote the number of respondents in cell \(i\), \(y_i\) the number of those respondents that supported gay marriage, and \(p_i\) the probability that a member of the general population of cell \(i\) supports gay marriage. We build a Bayesian multilevel logistic regression model of opinion as follows.

First we encode the respondent information.

The state-level data doesn’t contain region information, so we load census data in order to build a mapping between state and region.

Finally, we are ready to specify the model with PyMC3. First, we wrap the predictors in theano.shared so that we can eventually replace the survey respondent’s predictors with census predictors for posterior prediction (the poststratification step of MRP).

Throughout, we use a non-centered parametrization for our hierarchical normal priors for more efficient sampling. We now specify the rest of \(\eta_i\).

Here the theano.shared variable use_poll_ will allow us to ignore poll effects when we do posterior predictive sampling with census data.

Finally, we specify the likelihood and sample from the model using NUTS.

The marginal energy and energy transition distributions are fairly close, showing no obvious problem with NUTS. 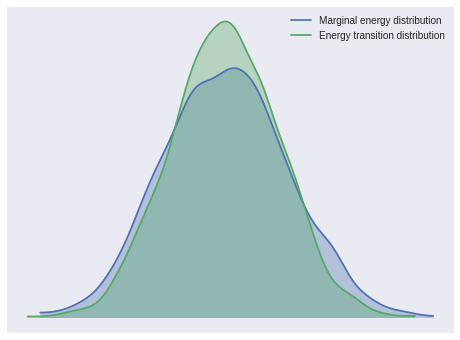 The Gelman-Rubin statistics for all parameters are quite close to one, indicating convergence.

We are now ready for the post-stratification step of MRP. First we combine the census and state-level data.

Next we encode this combined data as before.

We now set the values of the theano.shared variables in our PyMC3 model to the poststratification data and sample from the posterior predictive distribution.

We complete the poststratification step by taking a weighted sum across the demographic cells within each state, to produce posterior predictive samples from the state-level opinion distribution.

The simplest summary of state-level opinion is the posterior expected mean, shown below.

The following choropleth maps show the disaggregation and MRP estimates of support for gay marriage by state.

Notably, MRP produces opinion estimates for Alaska and Hawaii, which disaggregation does not. The following scatter plot makes it easier to see how the estimate for each state differs between disaggregation and MRP. 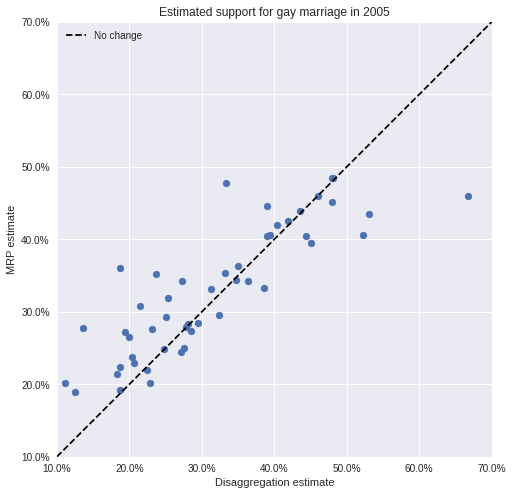 We see that the MRP estimates tend to be higher than the disaggregation estimates, possibly due to under-sampling of supportive demographic cells in many states.

An additional advantage of MRP is that we can produce better opinion estimates for demographic subsets than disaggregation. For example, we plot below the disaggregation and MRP estimates of support for gay marriage among black men. From above, we know disaggregation will not be able to produce an estimate for many states.

In addition to the gaps in the disaggregation map above, it seems highly unlikely that not a single black man in Minnesota, Arizona, New Mexico, etc. supported gay marriage in 2005. These disaggregation estimates are due to polling few black men in these states, which MRP attempts to counteract. For further discussion of estimating the opinions of demographic subgroups using MRP, consult Ghitza and Gelman’s Deep Interactions with MRP: Election Turnout and Voting Patterns Among Small Electoral Subgroups.

One advantage of using the fully Bayesian approach we have taken to MRP via PyMC3 is that we have access to the full posterior distribution of each state’s opinion, in addition to the posterior expected values shown in the above choropleth maps.

Specifying this model in PyMC3 would certainly have been simpler using Bambi, which I intend to learn soon for exactly that reason.

I am particularly eager to see what applications MRP will find outside of political science in the coming years.