Recently, a project at work has led me to learn a bit about capture-recapture models for estimating the size and dynamics of populations that cannot be fully enumerated. These models often arise in ecological statistics when estimating the size, birth, and survival rates of animal populations in the wild. This post gives examples of implementing three capture-recapture models in Python with PyMC3 and is intended primarily as a reference for my future self, though I hope it may serve as a useful introduction for others as well.

The simplest model of abundace, that is, the size of a population, is the Lincoln-Petersen model. While this model is a bit simple for most practical applications, it will introduce some useful modeling concepts and computational techniques.

The Lincoln-Petersen model assumes that: 1. each individuals has an equal probability to be captured on both visits (regardless of whether or not they were marked), 2. no marks fall off or become illegible, and 3. the population is closed, that is, no individuals are born, die, enter, or leave the site between visits.

The third assumption is quite restrictive, and will be relaxed in the two subsequent models. The first two assumptions can be relaxed in various ways, but we will not do so in this post. First we derive a simple analytic estimator for the total population size given \(n_1\), \(n_2\), and \(n_{1, 2}\), then we fit a Bayesian Lincoln-Petersen model using PyMC3 to set the stage for the (Cormack-)Jolly-Seber models.

Let \(N\) denote the size of the unknown total population, and let \(p\) denote the capture probability. We have that

The rows of x_lp correspond to site visits and the columns to individuals. The entry x_lp[i, j] is one if the \(j\)-th individuals was captured on the \(i\)-th site visit, and zero otherwise.

The Lincoln-Petersen estimate of \(N\) is therefore

We now give a Bayesian formulation of the Lincoln-Petersen model. We use the priors

Note that the prior on \(N\) is improper.

We now implement the likelihoods of the data given above during the derivation of the Lincoln-Petersen estimator.

Now that the model is fully specified, we sample from its posterior distribution.

First we examine a few sampling diagnostics. The Bayesian fraction of missing information (BFMI) and energy plot give no cause for concern. 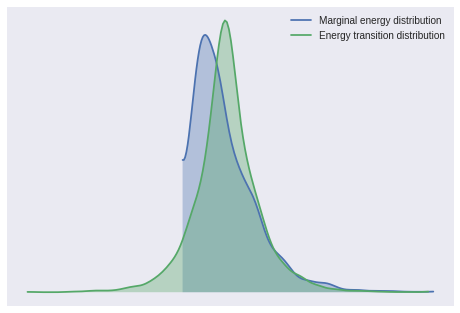 The Gelman-Rubin statistics are close to one, indicating convergence.

Since there are no apparent sampling problems, we examine the estimate of the population size.

The true population size is well within the 95% credible interval. The posterior estimate of \(N\) could become more accurate by substituting a reasonable upper bound for the prior on \(N\) for the uninformative prior we have used here out of convenience.

The Cormack-Jolly-Seber model estimates the survival dynamics of individuals in the population by relaxing the third assumption of the Lincoln-Petersen model, that the population is closed. Note that here “survival” does not necessarily correspond to the individual’s death, as it includes individuals that leave the observation area during the study. Despite this subtlety, we will use the convenient terminology of “alive” and “dead” throughout.

For the Cormack-Jolly-Seber and Jolly-Seber models, we follow the notation of Analysis of Capture-Recapture Data by McCrea and Morgan. Additionally, we will use a cormorant data set from the book to illustrate these two models. This data set involves eleven site visits where individuals were given individualized identifying marks. The data are defined below in the form of an \(M\)-array.

Here T indicates the number of revisits to the site so there were \(T + 1 = 11\) total visits. The entries of R indicate the number of animals captured and released on each visit.

Of the thirty individuals marked and released on the first visit, ten were recaptured on the second visit, four were recapture on the third visit, and so on.

Capture-recapture data is often given in the form of encounter histories, for example

We again place a uniform prior on \(p\).

From our parameter definitions,

The likelihood of the observed recaptures is then

Finally, some individual released on each occasion are not recaptured again,

The probability of this event is

The likelihood of the individual that were not recaptured again is

Now that the model is fully specified, we sample from its posterior distribution.

Again, the BFMI and energy plot are reasonable. 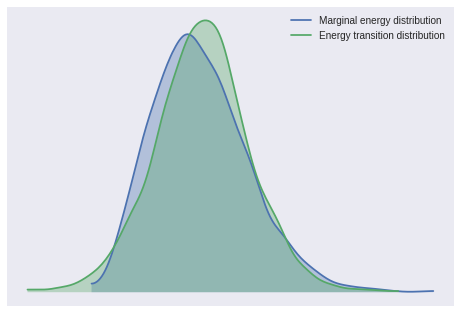 McCrea and Morgan’s book includes a table of maximum likelihood estimates for \(\phi_i\) and \(p\). We verify that our Bayesian estimates are close to these. 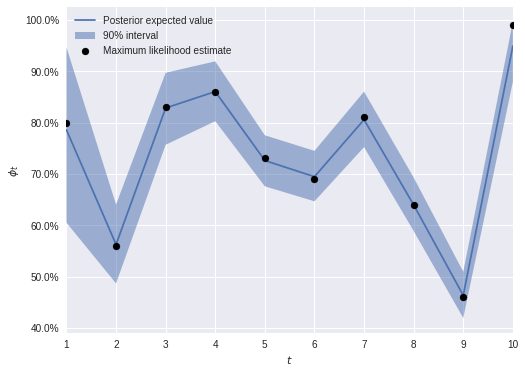 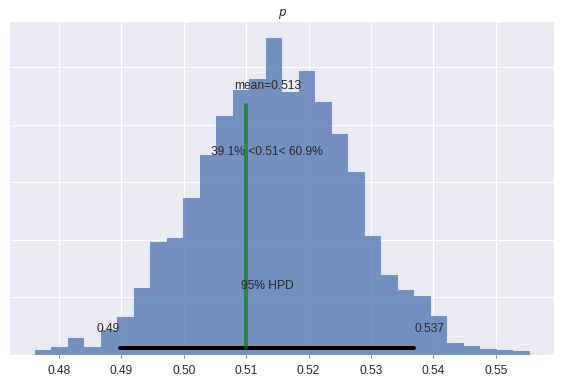 As with the Lincoln-Petersen model, the Jolly-Seber model estimates the size of the population, including all individuals ever alive during the study period, \(N\). We use the Schwarz-Arnason formulation of the Jolly-Seber model, where each individual has probability \(\beta_i\) of being born into the population between visits \(i\) and \(i + 1\). We place a \(\operatorname{Dirichlet}(1, \ldots, 1)\) prior on these parameters.

After writing out the first few terms, we see that this recursion has the closed-form solution

Therefore, the likelihood of the observed first captures is a \((T + 1)\)-dimensional multinomial, where the first \(T\) probabilities are \(\Psi_1 p, \ldots, \Psi_T p\), and the corresponding first \(T\) counts are the observed number of unmarked individuals captured at each visit, \(u_i\). The final probability is

and corresponds to the unobserved number of individuals never captured. Since PyMC3 does not implement such an “incomplete multinomial” distribution, we give a minimal implementation here.

As in the Lincoln-Petersen model, we place an improper flat prior (with the appropriate lower bound) on \(N\).

The likelihood of the observed first captures is therefore

Again we sample from the posterior distribution of this model.

Again, the BFMI and energy plot are reasonable. 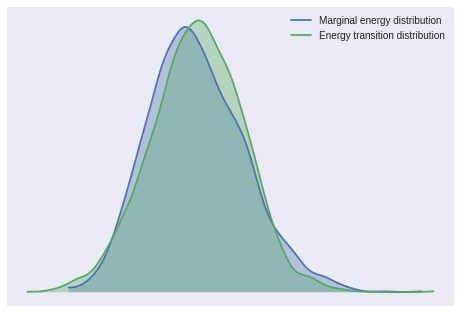 The posterior expected survival rates are, somewhat surprisingly, still quite similar to the maximum likelihood estimates under the Cormack-Jolly-Seber model. 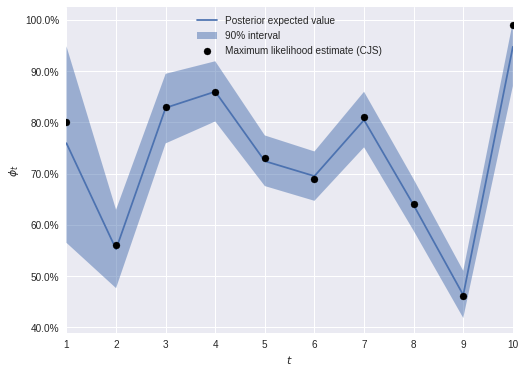 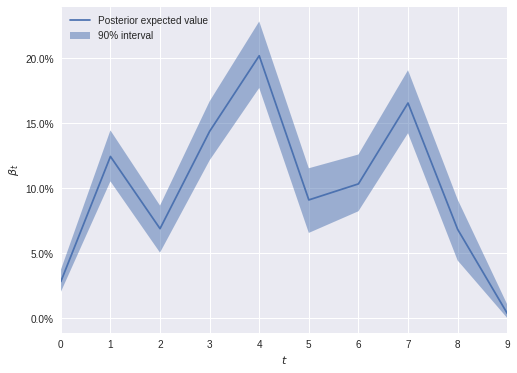 The posterior expected population size is about 30% larger than the number of distinct individuals marked. 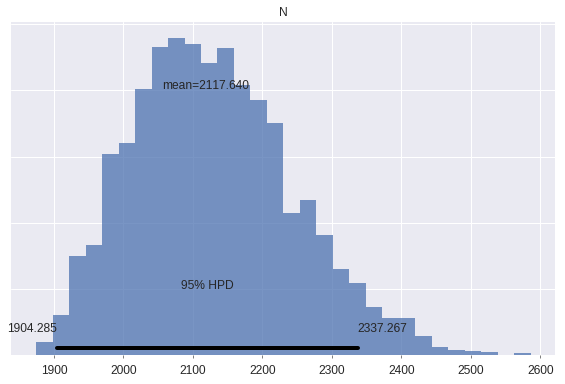 We may explore one (or both) of these approaches in a future post.

Thanks to Eric Heydenberk for his feedback on a early draft of this post.