The question asks whether or not this code does indeed generate points uniformly distributed on the unit circle.

At first glance it seems reasonable that it might do so. Upon slightly further reflection, we see that for the results to be uniformly distributed, we must map the square \([-1, 1] \times [-1, 1]\) to the unit circle in a manner that preserves area (in the appropriate sense). From this point of view, we can quickly conclude that the results will not be uniformly (EDIT: this originally read “normally,” which was a typo) distributed.

To see why, consider the following diagram. 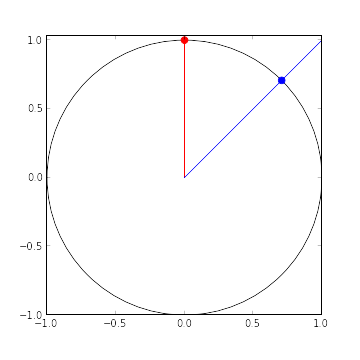 The following diagram shows a heatmap of the locations of one million samples generated by this function.

We can see that the samples do indeed cluster around those four points, as shown by the red regions in the heatmap.

Although this problem is fairly simple, unlike many interview problems it reinforces a key breakdown in our intuition about probability theory and naive interpretations of transformations of random variables.

Many people have pointed out that this isn’t a great problem for general developer interview, and I agree. This interview was for a data-oriented position which required a strong understanding of probability theory.